Beyond the Visible: HILMA AF KLINT

Before Kandinsky, Mondrian, and Klee made a name for abstraction in visual art, another artist had already beat them to their discovery. But until very recently, her name was absent from the history books. Swedish artist Hilma af Klint (1862-1944) painted her first abstract canvas in 1906, four years before Wassily Kandinsky, originally thought to be the movement’s pioneer. It would be more than a century before she would receive the same acknowledgment and acclaim as her male peers.

Beyond The Visible is the story of a visionary artist whose talent, intellect, and dedication to her craft produced a prolific body of work unlike any other. Inspired by spiritualism, science, and the natural world, af Klint painted astonishingly contemporary microcosms of color and form. Director Halina Dryschka’s absorbing documentary is an exploration of how such an exceptional woman could be so frustratingly erased from the art world, written out by an industry dominated by the idea of male “genius.” Af Klint may not have exhibited during her lifetime, but a recent retrospective of her paintings broke the Guggenheim Museum’s 60-year attendance record, suggesting that the world may finally be ready to rewrite history. -Vancouver International Film Festival   Not rated.  In German, Swedish and English (subtitled in English where applicable). 94 minutes. 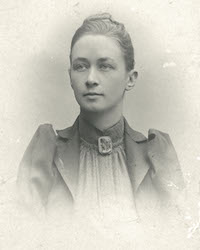