A unique behind-the-scenes look at the highs and lows of the life and career of Bill Wyman, founding member of the Rolling Stones and renaissance man of rock and roll.

Against the odds, Bill escaped a bleak future in post-war London to find himself at the very center of a musical and cultural revolution. As a Rolling Stone he embarked on record-breaking world tours, dealt with feuding band mates and befriended some of the world’s most iconic musicians, actors, sportsmen and artists. Then, to people’s amazement he walked away from it all to commit to a new family and to set about documenting and preserving the memory of the ‘rock and roll revolution’.

Throughout his career Bill shot hours of unseen film footage, took thousands of photographs, collected a vast archive of memorabilia and kept a detailed diary of each and every single day. The film uses his huge archive as the catalyst for stories about Bill’s experience of wartime poverty, his love of blues music, the rise of the Stones, the ‘60s counter culture, exile in France, his ‘70s super groups, ‘80s excesses and his life’s work documenting and preserving the memory of such an important period of cultural and musical history.  Also appearing are Eric Clapton, Bob Geldof, Buddy Guy, Andrew Loog Oldham, Charlie Watts, Mary Wilson – and in archival footage – Mick Jagger, Brian Jones, Keith Richards, Mick Taylor, Muddy Waters and Ronnie Wood. Not Rated. 98 minutes. 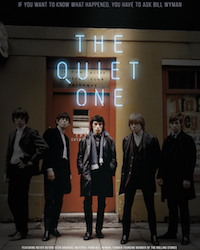