Group Sales Subscribe Share Save
Saturday, February 17, 2018
3:30 and 7:30 pm
Tonight Show favorite Brian Brushwood’s blend of shocking stunts and unusual magic will leave fans of all ages laughing and amazed. Brushwood, host of National Geographic Channel’s Hacking the System, has the unique ability to take outrageous, dangerous and amazing feats and blend them with the right amount of comedy to give each routine a polished look and feel.
Make no mistake about it, Bizarre Magic with Brian Brushwood is something special. In one show, Brushwood—who has appeared on dozens of television and radio broadcasts, including programs on ABC, NBC, FOX, BBC and E!—eats fire, escapes from an audience-tied straitjacket, breaks concrete bricks over his head, sticks nails in his eyes, reads minds, lays on a bed of nails, performs the indescribable “human crazy straw” and so much more!
While Brushwood—the author of The Professional’s Guide to Fire Eating; Pack the House; and Cheats, Cons, Swindle, and Tricks—may seem pretty freaky, the Bizarre Magic show is still very much a magic show, complete with sleight-of-hand, comedy, telepathy, escapes and crazy stunts. Furthermore, Brushwood’s show contains no foul language, inappropriate jokes or “blue” material. There is absolutely nothing said in the show that is not appropriate for the entire family to hear.
“Brian Brushwood just kills me,” says Proctors alum and legendary magician Teller (of Penn & Teller). “He’s funny, dangerous and brilliantly original.” 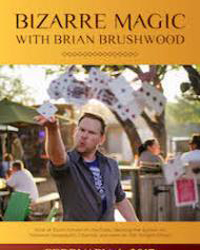