“Diving headlong into one of the most controversial moments in Bob Dylan’s storied career and paying no need to unbelievers, Trouble No More unearths rare concert footage from the singer’s “Christian period” when he toured small venues playing nothing but songs about his new faith. The singer’s refusal to perform his hits angered fans at the time… but seen on the big screen it proves to be something of a come-to-Jesus moment for unconverted viewers, loaded with fine performances of songs that fit comfortably in the songwriter’s canon.” – Hollywood Reporter.  Not Rated. 60 minutes. 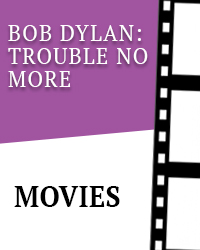