Nominated for three Academy Awards, including Best Actress (Charlize Theron) and Best Supporting Actress (Margot Robbie), Bombshell provides a revealing look inside the most powerful and controversial media empire of all time, while telling the explosive story of the courageous women who brought down the infamous man who created this empire.  While Theron – as Fox’s most powerful female anchor, Megyn Kelly – leads viewers through the tale, it is the sharp and heroic Gretchen Carlson (Nicole Kidman) who actually leads the charge.  Robbie is the new kid on the block who quickly comes to understand the ugly rules of game. Allison Janney, and Kate McKinnon also star, with John Lithgow as Fox News head, Roger Ailes, and Malcolm McDowell as pragmatic network owner, Rupert Murdoch. Rated R for sexual material and language throughout. 109 minutes.. 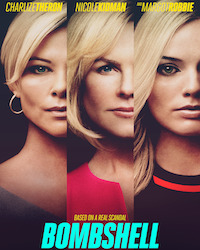