It has always seemed as if there were two Cheryl Wheelers, with fans of the New England songwriter relishing watching as the two tussle for control of the mic. There’s Poet-Cheryl, writer of some of the prettiest, most alluring and intelligent ballads on the modern folk scene. And then there’s her evil twin, Comic-Cheryl, a militant trend defier and savagely funny social critic.

Her plain-spun songs have been hits for such mainstream stars as Suzy Bogguss and Dan Seals, recorded by everyone from Bette Midler to Maura O’Connell, Peter Paul & Mary, Juice Newton and Garth Brooks; then on to Kathy Mattea, Holly Near and Melanie. While not strictly an activist performer, her smash song “If It Were Me” has gotten much attention in this age of school shootings.

A long-time audience favorite, her appearances on 8th Step stages have included several album release concerts, a sellout duo with Christine Lavin, and as part of the blockbuster ‘On a Winter’s Night’ with Patty Larkin, Cliff Eberhardt and John Gorka.

Wheeler is wonderful on CD, radio or YouTube – but Wheeler LIVE is – we mean this – not to be missed.

KENNY WHITE comes to the world of the touring singer-songwriter following a long and successful musical journey. Long List of Priors, his aptly named new album, collects his latest original songs, snapshots of the human condition from heartwarming to humorous. Radio favorites are “Cyberspace,” and “A Road Less Traveled” featuring David Crosby on harmony vocals.

Hailed by reviewers from The New York Times to the San Francisco Chronicle for his thrilling and unique piano playing, talented singer-songwriter Kenny White is also a successful NYC-based record producer. He has written, performed, and produced music for hundreds of TV and radio commercials, and film soundtracks including four by independent filmmaker John Sayles. He has toured with stars Judy Collins, Stephen Stills and Tom Jones, among others, and appeared on dozens of recordings by other musicians. 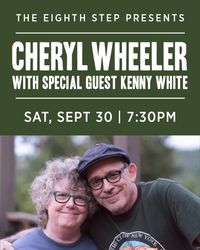