Based on the French novel, Les Liasions Dangereuses, and the classic cult film starring Reese Witherspoon, Ryan Phillipe and Sarah Michelle Geller, Cruel Intentions: The ’90s Musical pulls you into the manipulative world of Manhattan’s most dangerous liaisons: Sebastian Valmont and Kathryn Merteuil. Seduced by revenge and fueled by passion, the two diabolically charming step-siblings place a bet on whether or not Sebastian can deflower their incoming headmaster’s daughter, Annette Hargrove. As the two set out to destroy the innocent girl—and anyone who gets in their way—they find themselves entangled in a web of secrets, temptation, and the cruelest game of all: love. Featuring your favorite throwback hits by artists like Boyz II Men, Christina Aguilera, REM, *NSYNC, and, of course, Britney Spears, this intoxicating new musical is “the ultimate night out” (Entertainment Weekly). 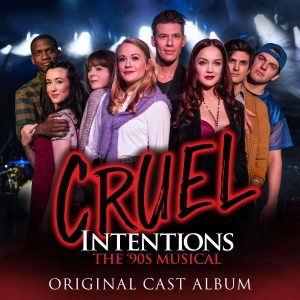 ABKCO Records released Cruel Intentions: The ‘90s Musical Original Cast Album on CD and digital platforms on March 8.  Coinciding almost perfectly with the 20th anniversary of the Roger Kumble film from which it is based, the new Off-Broadway musical uses hit songs from the 1990s as its central motif. Cast members pay tribute to the decade with stellar performances of The Verve’s “Bittersweet Symphony,” Christina Aguilera’s “Genie In a Bottle,” the Cardigans’ “Lovefool” and the lead single “Breakfast at Tiffany’s” originally by Deep Blue Something now available streaming services and as an Instant Grat, available for order now. http://www.smarturl.it/cruelmusical 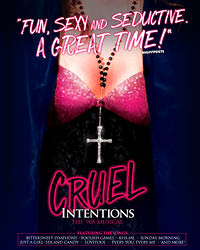