David Brooks has a gift for bringing audiences face-to-face with the spirit of our times with humor, insight and quiet passion. He is a keen observer of the American way of life and a savvy analyst of present-day politics and foreign affairs.

He holds several prestigious positions as a commentator, including bi-weekly Op-Ed columnist for The New York Times, and regular analyst on PBS NewsHour and NPR’s All Things Considered.

David’s newest book, The Road to Character, “explains why selflessness leads to greater success. He tells the story of ten great lives that illustrate how character is developed, and how we can all strive to build rich inner lives, marked by humility and moral depth. In a society that emphasizes success and external achievement, The Road to Character is a book about inner worth.”

His previous book, The Social Animal: The Hidden Sources of Love, Character and Achievement, uses the story of a fictional American couple to explain the importance of neuroscience and sociology in understanding America’s politics, culture, and future. His other books, Bobos in Paradise and On Paradise Drive are in a style he calls “comic sociology”—descriptions of how we live and “the water we swim in” that are as witty and entertaining as they are revealing and insightful. Bobos in Paradise was a New York Times bestseller.

David Brooks is currently teaching a course at Yale University. He holds honorary degrees from Williams College, New York University, Brandeis University, Occidental College, among others. In 2010, Brooks became a member of the American Academy of Arts and Sciences.

David Brooks has worked at The Weekly Standard, joining the magazine at its inception and serving as senior editor. He has been a contributing editor at Newsweek and the Atlantic Monthly. He worked at The Wall Street Journal for nine years in a range of positions, including op-ed editor. 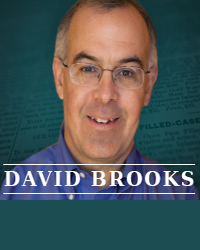