AND THE 2018 GRAMMY® AWARD FOR BEST MUSICAL THEATER ALBUM.

DEAR EVAN HANSEN has struck a remarkable chord with audiences and critics everywhere, including The Washington Post who says DEAR EVAN HANSEN is “one of the most remarkable shows in musical theatre history.” The New York Times calls it “a gut-punching, breathtaking knockout of a musical.” And NBC Nightly News declares the musical “an anthem resonating on Broadway and beyond.”

At Proctors, we aim to make theatre accessible for all. For Dear Evan Hansen, we are proud to offer four options for hearing-impaired individuals.

Interpreted Performance
This performance will feature a sign language interpreter. For more information or to request access to this section, please call our Box Office at 518.346.6204

Hearing Loop
Proctors now offers a hearing loop system in our theatre. Simply turn your hearing device onto the t-coil setting to amplify the sound.

Sound Receivers
FM wireless sound receivers are available at the Box Office before the show. These headsets are standard walkman headsets; patrons are welcomed to bring their own in lieu of borrowing one. They can be reserved by contacting the Box Office at 518.346.6204. 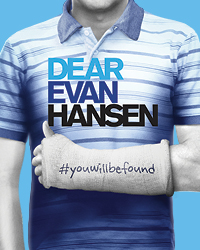