In October 1965, The Beatles were faced with an impossible task — produce a new album of original music for a Christmas release.  Within one month, The Beatles emerged with what many consider to be one of their greatest albums — Rubber Soul.  They even had time to create a double A-side single, “We Can Work It Out” backed by “Day Tripper.”   Both sides of the single, as well as the album, hit number one on the charts.

In Deconstructing The Beatles’ Rubber Soul, composer/producer Scott Freiman – who Proctors audiences have had the pleasure of experiencing in person on several occasions, and fingers crossed, will do so again in our upcoming 2019-20 season – takes Beatles fans young and old through the creation of this wonderful and fantastic album.   Learn the stories behind the creation of “Norwegian Wood,”  “In My Life,”  “Nowhere Man,”  and other classic Beatles songs.  Not rated. 89 minutes. 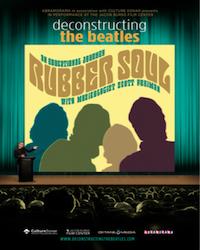