The March 2021 dates of AIDA has been postponed. New rescheduled dates will be announced at a later date.

A LOVE STORY WRITTEN IN THE STARS

The winner of four Tony® Awards returns to the stages of North America!

With a Grammy® and Tony Award-winning score by the legendary Elton John and Tim Rice and a revised book by Tony Award-winning playwright David Henry Hwang, the hit Broadway musical AIDA returns to the stage in a thrilling new production. The producers of THE LION KING and FROZEN have reunited the original Tony Award-winning design team of Bob Crowley (scenery and costumes) and Natasha Katz (lighting) to reinterpret their designs in the retelling of this passionate and timeless story for today’s audiences.

Directed by Schele Williams, choreographed by Camille A. Brown and musical supervision by Tony Award-winning Jason Michael Webb, AIDA is a compelling tale of star-crossed lovers belonging to feuding nations, torn between their conflicted loyalties to their countries and to each other. With its stirring contemporary score and its powerful love story, AIDA reveals that we have the power to change history, but only when we make brave choices and embrace our destiny.

Tickets to AIDA are available as part of the Key Private Bank Broadway Series subscription package at Proctors. Single tickets are not currently available. 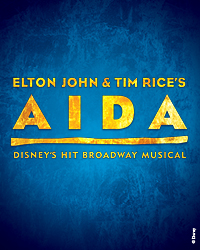