Multimedia mixmaster DJ XL5 returns to Schenectady to present his highly acclaimed Nine Lives Cat-tastic Big Screen Movie Party, plus – you’ve been asking for it – Pink Moon In The City of Emeralds, his painstakingly synced and audio-accentuated version of, well... nudge nudge, wink wink, say no more, say no more!   And we won’t!   With “Nine Lives,” however, we can tell you to not only expect the latest antics of “Simon’s Cat,” but also a kitten-kabodle of short cat-related film excerpts, commercials, and other feline eccentricities including a must-be-seen-to-be-believed cat-slap performance to the purrrrrfect music of Joy Division.  But that’s not all!   Act now and also included in this collection (in fact, the bulk of this collection) will be a whole bunch of great non-kittycat shorts, including “Great Choice,” a hilarious film in which a woman finds herself stuck inside a nightmarish Red Lobster commercial, “Call for a Good Time”, wherein a stoner discovers why you should never call the numbers scrawled on a bathroom stall, and “Pig”, the tale of a self-conscious psychopath who struggles with his body image while attempting to terrorize unsuspecting campers. Not rated.  215 minutes, including one short intermission. 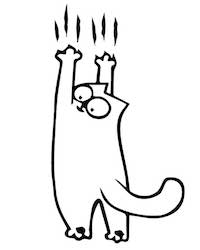