Close message bar
Additional Box Office Hours: Starting Dec. 4, the Box Office at Proctors will be additionally open 10 a.m. - 2 p.m. on Sundays during the Schenectady Greenmarket. The box office will continue to be open Monday- Saturday 10 a.m. - 6 p.m. weekly.
Group Sales Subscribe Share Save
Tuesday, November 29, 2022
On November 29, 2002, Paul McCartney, Ringo Starr, Eric Clapton, Tom Petty, Jeff Lynne, Monty Python and a great many others performed at London’s Royal Albert Hall in a memorial to George Harrison on the first anniversary of his death. This November 29th, on the 20th anniversary of that concert, and the 21st anniversary of Harrison’s premature passing, Proctors is excited to present that historic concert with a brand new restoration of both its audio and video.

Performances include McCartney on “All Things Must Pass,” McCartney and Clapton on “Something,” McCartney, Clapton and Starr reuniting on “While My Guitar Gently Weeps,” Clapton on “If I Needed Someone,” Clapton and Billy Preston on “Isn’t It a Pity,” Preston on “My Sweet Lord,” Petty on “Taxman,” Petty and Lynne (with Dhani Harrison and Jim Keltner as quasi-Traveling Wilburys) on “Handle With Care,” and so very much more.

$9 general admission. $6 for seniors & for students w/ID (available at door). 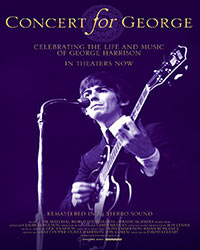