While still a child, young Michael carefully cut out all of the Horror and SciFi movie ads that he found in local newspapers, leaving him with an astounding collection that traced cinema’s storied history via both blockbusters and obscurities.  In 2018, he published a beautiful collection of his Horror film ads alongside reviews from contemporary critics and his own observations and analysis. The resulting artbook, Ad Nauseam: Newsprint Nightmares from the 1980s was an immediate commercial and critical hit, leading to Ad Astra, a SciFi focused volume, as well as Ad Nauseam II,  a 2nd collection of Horror ads,   Though the later will not officially be released until September 24, Gingold has agreed to visit Proctors on September 19 in order to host an entertaining live multimedia presentation of Ad Nauseam II on our GIANT GE Theatre screen.

Encompassing many of the stories and vivid visuals from this book, this presentation will cover big-budget gothics’ like Bram Stoker’s Dracula and Interview With the Vampire, gruesome franchises (Saw, Final Destination), remakes (The Texas Chainsaw Massacre, Dawn of the Dead), found footage (The Blair Witch Project, Paranormal Activity), slashers (Scream, I Know What You Did Last Summer) and – of course – oddball originals like Donnie Darko, a screening of which will follow Gingold’s presentation. Incredibly, Gingold has been authorized by his publisher to make a VERY SMALL HANDFUL of pre-release copies of his latest 270-page, full color, hardbound collectible available to Proctors devotees for sale and signing.  He will also bring along equally small quantities of Ad Astra and his original Ad Nauseam.

As for Donnie Darko, this must-see modern classic is about a troubled teenager plagued by visions of a man in a large rabbit suit who manipulates him to commit a series of crimes.  ICFS will be screening the original theatrical version, and as with other ICFS events, you can expect prizes, surprises, comfy couches and dark, delicious drink specials!  The event running time, including a brief intermission will be approximately 175 minutes. Donnie Darko is rated R for language, some drug use and violence.

More about Michael Gingold: A lifelong fan of horror, science fiction and fantasy films, Michael Gingold first wrote about scary cinema in his Xerox fanzine Scareaphanalia. He began contributing to Fangoria magazine in 1988, joined the staff in 1990, and quickly rose to managing editor and ultimately editor-in-chief; after 28 years with its original incarnation, he returned for its relaunch in 2018. Michael has also written for Rue Morgue, Birth.Movies.Death, MovieMaker, Time Out New York, Scream, and IndieWire, and contributed liner notes, video featurettes, and commentaries to Blu-rays from Shout! Factory, Arrow Video, Synapse Films, Vinegar Syndrome, Blue Underground, and Garagehouse Pictures. 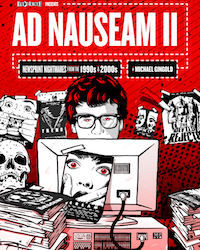