Group Sales Subscribe Share Save
Thursday, January 12, 2023
A cruise for the super-rich sinks, leaving survivors, including a fashion model celebrity couple, trapped on an island.

Triangle of Sadness won The Palme d’Or at the Cannes Film Festival this year – the highest prize awarded at the world’s most prestigious international film festival. The film, of course, is also expected to be nominated for several Academy Awards. It is already nominated for the following Golden Globe awards: 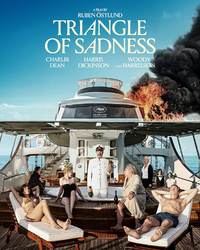