10 years ago, the wild and wondrous running film festival known as It Came from Schenectady was hatched. From that very first 24-hour Sci-Fi marathon, to Godzilla Kaiju, The Room, The Big Lebowski, the Saturday Morning Cartoon Cereal Bowl, Soul Cinema and so much more, ICFS has presented multiple hundreds of crazy film parties always with themed drinks, games, prizes, surprises and of course, kind-of  comfy couches.
Join us in the GE Theatre for an anniversary celebration with guests and games from ICFS past and a retro screening of out-of-this-world classic that started it all, Forbidden Planet.
In addition to the screening of this Robby the Robot vehicle, expect contests, special video extras, and all the goofy, nerdy, stupid fun that has fueled the first decade of It Came from Schenectady.
Friday, September 14 at 7pm 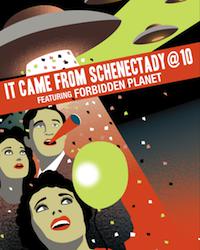