This fall’s GOLDEN OLDIES SPECTACULAR features six acts and combines legendary stars with the next generation of singers who will keep this timeless music alive. THE LETTERMEN headline the show.  Their incredible renditions of harmonious love songs resulted in 18 gold albums, 32 consecutive albums on the Billboard charts, 16 top 10 singles on the Adult Contemporary charts, 11 gold records and 5 Grammy nominations.  Hits include: “The Way You Look Tonight,” “When I Fall in Love,” “Theme from a Summer Place,” “Hurt So Bad” (spent 21 weeks on the Hot 100 chart) and the smash hit “Goin’ Out of my Head/Can’t Take my eyes off You.”  Original founding member Tony Butala is joined by long-time members Donovan Tea and Bobby Poynton. Co-headlining the show is long-time Capital district favorite, “Lightning” Lou Christie.  Lugee Alfredo Giovanni Sacco grew up outside Pittsburgh, singing in the high school choir.

Unlike most of the teen idols of the era, Lou wrote his own songs in collaboration with classically trained musician, Twyla Herbert.  Lou moved to New York City and Morris Levy’s Roulette Records distributed his first hit, 1962’s “The Gypsy Cried,” which became his first gold record.  “Two Faces Have I” peaked at #6, and Lou joined Dick Clark’s Caravan of Stars tour.  After two years in the Army, Lou signed with MGM Records and had his smash hit, “Lightning Strikes,” which was #1 in the US and Canada and #6 in the UK. “Rhapsody in the Rain,” inspired by Tchaikovsky’s “Romeo and Juliet,” was the next hit.  In 1969, Lou signed with Columbia Records and “I’m Gonna Make you Mine” was top 10 and went to #6 in the UK.  Lou spent the early 1970s in London where Elton John was his piano player.  Lou’s last hit was “Beyond the Blue Horizon,” featured in the movie “Rain Man.”  Lou’s incredible falsetto remains fully intact. DOLORES “LA-LA” BROOKS is a Renaissance lady of rock and roll.  Born as one of 11 children in Brooklyn to a Native American mother and Afro American father, Brooks sang in the church choir.  While attending PS #73, she joined classmates, including Dolores “Dee Dee” Kennibrew to form the quintessential “girl group,” The Crystals.  The Crystals were under the management and direction of producer Phil Specter, and La La sang lead on “Da Doo Ron Ron” (top 5 in US and UK) and “Then he Kissed Me (#2 in UK).  In 1968, Brooks performed in the original Broadway cast of “Hair,” singing “Aquarius.”  She performed in other Broadway productions and contributed songs to movies such as “Cotton Comes to Harlem.”  Proctors audience will be blown away by her total on-stage energy.

At age 18, JIMMY CLANTON, born and raised in Baton Rouge, led his band “The Rockets” to popularity; they were one of the top rhythm and blues bands on the gulf Coast.  An appearance on Dick Clark’s American Bandstand resulted in “Just a Dream” becoming a hit and Jimmy Clanton becoming a star.  Clanton had 7 top 40 hits and 4 gold records, including “Go, Jimmy, Go” and “Venus in Blue Jeans.”  He starred in two Alan Freed movies, “Go, Johnny, Go” and “Teenage Millionaire.” BOBBY BROOKS WILSON, the son of legendary R+B/Soul singer Jackie Wilson, is keeping his father’s legacy alive. His uncanny resemblance, voice and moves energize audiences.  He gets rave reviews and will steal the show. LADD VANCE is the son of Kenny Vance.  The Proctors audience will love Ladd just as they love Kenny.

Six great acts; one great night of hit records.  Thanks for keeping the music alive.! 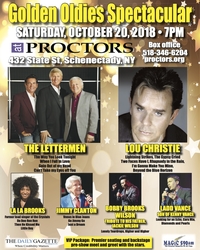