An incredible six act GOLDEN OLDIES SPECTACULAR graces the Proctors stage on Saturday, April 4, 2020 at 7:00 Headlining the show are The Brooklyn Bridge, highlighted by a tribute to the memory of their incredible lead singer Johnny Maestro who passed ten years ago. Hits include “The Worst That Could Happen,” “Blessed is the Rain,” “You’ll Never Walk Alone,” and “Welcome Me Love.” Lead singer Joe Esposito is fantastic and many original members are still in the Brooklyn Bridge.

Shirley Alston Reeves: Former lead singer of The Shirelles, they were inducted into the Rock and Roll Hall of Fame in 1996. As the most popular “girl group,” they had many smash hits, Including “Soldier Boy,” “Will you still Love me Tomorrow,” “Mama Said,” “Tonight’s the Night,” “Baby, It’s You” and “Foolish Little Girl.”

The Vogues: Known for their incredible harmonies, The Vogues were inducted into the Vocal Group Hall of Fame in 2001. Their hits include “Turn Around, Look at Me,” “Five O’Clock World,” “My Special Angel” and “You’re the One.”

The Skyliners: One of the best doo wop groups in American music, Pittsburgh’s own Skyliners hits include “Since I Don’t Have You,” “This I Swear” and “Pennies from Heaven.”

Vito Picone & The Elegants: This great doo wop group from Staten Island opens the show. Their hits were (“Where are you) Little Star” and “Little Boy Blue.”

One great night of musical memories, with six great acts on stage who will transport the audience back to a great begone era. 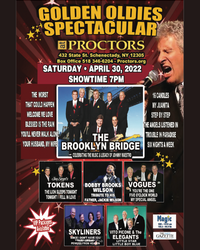