NOTE: Gorillaz: Reject False Icons contains a sequence of flashing lights which might affect customers who are susceptible to photosensitive epilepsy.

In his debut feature, director Denholm Hewlett followed the band’s every move for three years, covering the making of two critically acclaimed albums and a world tour. The result is the first ever all-access immersive journey into the world of Gorillaz and its extended family – featuring never-seen footage, where the virtual meets the real -to capture the wondrous chaos of life under the watchful eye of Murdoc Niccals (bass), Noodle (guitar), Russel Hobbs (drums) and 2D (vocals).

* The band are recognized by The Guinness Book Of World Records as
the planet’s Most Successful Virtual Act. 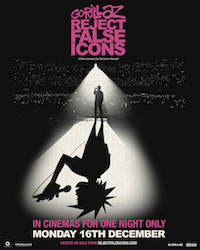