CD Release: “Songs From the Beginning”
with Fabio Pirozzolo, percussion

“Confessional one moment, rambunctiously disarming the next, few modern folk singers can own a coffeehouse stage as completely as Greenway” BOSTON GLOBE

“A profoundly rich poet and musician. Folk Music is too narrow a description.” ON THE SQUARE

Singer-songwriter and multi-instrumentalist, Greg Greenway’s music has taken him to notable stages from Carnegie Hall to All Things Considered and Mountain Stage and abroad. But he also loves coffeehouses and considered it a career high when his song “Driving in Massachusetts” played on Car Talk.

His latest project Deeper Than the Skin is a close collaboration and labor of love with his close friend Reggie Harris. Born three years apart in Richmond, Virginia – one African-American, one White – they intertwine stories of their Southern childhoods in a richly musical and deeply poignant look at race in America.

Nurtured in the fertile ’70s Boston music scene, he has long been recognized as one of the strongest and finest voices in contemporary folk music.

Musically, his guitar, piano, ukulele, and melodica reflect inspiration from all over the map – gospel, rock, blues, jazz, and world music but firmly rooted in the singer/songwriter tradition traced back to the socially aware music of Woody Guthrie. Onstage he exudes a magnetic energy, high-spirited give-and-take, honest empathy, fun and good humor that make him simply irresistible to audiences.

His notable songs “What Must Be Done” and “In the Name of Love,” (a lead- in to the U2 classic “Pride”) have been sung by choirs internationally. These two works helped shape his evolution into an artist not only uncommonly entertaining, but sensitive, bold and powerful on contemporary issues and our common humanity.

Spurred by repeated audience demand, Songs From the Beginning collects songs written from his Boston years to the present. but don’t expect a mere nostalgia album: it already hit #3 on the FAI Folk DJ “best of” list. The high praise is mounting for this unforgettable solo work. 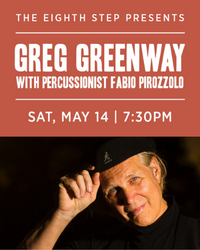