Director Andy Sidaris is known as the King of Bullets, Bombs and Babes, and Hard Ticket To Hawaii is the most popular of his films, each of them more dumbfounding than the next. Former Playboy Playmates Dona Speir and Hope-Marie Carlton star. Dona plays Donna, a Secret Agent who tells us she does her best thinking in a hot tub. She – like most of the rest of the cast – also likely do their best acting in their sleep, because very little of it is evident up on the screen. Hope-Marie plays Dona’s partner, Taryn, a badass civilian in witness protection. Or maybe she’s a Secret Agent too? It’s not entirely clear and it kinda doesn’t matter. Either way, the two also have cover jobs as pilots for a Hawaiian cargo company, and their cargo on one otherwise routine flight includes a giant mutant snake that has become deadly toxic from eating too many cancer-infested rats. Yup. You heard that right. We have us a case here of Snake-on-a-Plane. And once the plane lands, it’s Snake-pretty-much-Everywhere-Else too! You want more? This film also has kung fu fighting, sumo wrestling, a literal Blow-up doll, a secret message in a sandwich, a razor-sharp frisbee murder, and more costume changes with fewer private places to change in than one could dare to imagine. Alright, so Citizen Kane this ain’t, but damn if it isn’t a heck of a lot of ridiculously dumb fun. As with other ICFS events, expect SIDARIS-SPECIFIC prizes, surprises, comfy couches and utterly ridiculous drink specials! Rated R. 96 minutes  Rated R.  96 minutes. 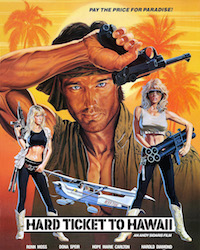