We won’t lie to you.  Elisabeth Moss and frequent collaborator, writer/director Alex Ross Perry (fresh from the screenplay for Christopher Robin), practically dare audiences to bare witness to Moss’s intense performance as “Becky Something,” the monstrous and self-destructive star of a riot grrrl band.  Struggling with sobriety and attempts to recapture the creative inspiration that led her band to success (not to mention the younger, prettier rivals who threaten to make her obsolete), Moss’s Becky Something appears to be a cross between Courtney Love, Amy Winehouse and a freakin’ Tasmanian Devil.  And Moss is nothing if not fully committed to this audacious role.  Also starring Cara Delevingne, Gayle Rankin, Agyness Deyn, Amber Heard, Virginia Madsen and Eric Stoltz.  As with other ICFS events, expect prizes, surprises, comfy couches and out-of-control drink specials!  Rated R for language throughout and some drug use.  134 minutes. 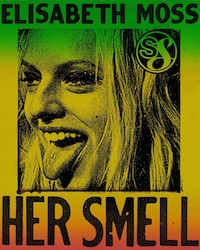