Electric Church tells the story of the Jimi Hendrix Experience’s involvement as the headliner of the second Atlanta International Pop Festival, then hailed as the “Southern Woodstock”.  Hendrix’s performance at the festival was not only significant on a musical level, but also in terms of socio-political dynamics. It was assumed that rural audiences would not take kindly to “long-hair” bands, and that black and white artists could not comfortably exist on the same bill.  Atlanta Pop  set out to challenge those beliefs, and Hendrix’s music – and message of universal love – made him the ideal headliner, as well as the first act booked for the event.

In addition to his incredible performances, the film features interviews with Hendrix bandmates Billy Cox and the late Mitch Mitchell, as well as Paul McCartney,  Steve Winwood,  Rich Robinson,  Kirk Hammett,  Derek Trucks,  Susan Tedeschi, and many others.  McCartney freely admits to worshipping him, adding, “We all played guitar. We all knew a bit. But he seemed to know more than us.”

“But forget all that. The whole point of this is getting to see good footage of Jimi Hendrix playing… and that’s what we get here uninterrupted in the middle of the film. And isn’t that ideal? I don’t want to hear people waxing eloquent about Hendrix while he’s playing instrumental passages, I just want to see and hear Hendrix being Hendrix.”   Not rated.  90 minutes. 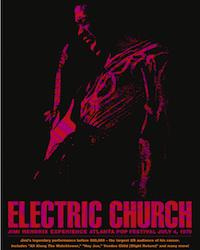