Along with Eraserhead, Pink Flamingos and El Topo, Carpenter’s DARK STAR was a staple of the stoner Midnight Movie circuit. Co-written with the terrific Dan O’Bannon, whose other screenplay credits include beloved classics such as Alien, Return of the Living Dead, and Total Recall, Dark Star hilariously spoofed 2001: A Space Odyssey (and briefly, Dr. Strangelove), while also serving as a blueprint for elements of Alien. The story takes place on the aging deep-space cruiser Dark Star, a vessel badly in need of maintenance and provisions.  Its crew, bored astronauts who have spent 20 years alone in space, were given a mission to blow-up “unstable” planets (eg: any planet with evidence of intelligent life, since any life in space could prove a hinderance to Earth’s plans for the colonization). Things begin to liven up for the crew when a series of malfunctions leads them to have to convince one of their smart bombs to ignore a faulty signal and NOT explode while still firmly attached to their ship!  Rated G.  83 minutes. 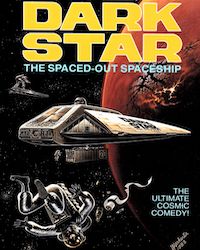