CD Release: ‘Leap!’
“The multi-instrumentalist wonder, a master at leading into a song with a story” THE SUN

“Too many songs is a nice problem to have,” he says. “I love these stories and want to share what I found therein.”

For fifty years he’s toured the world, and has appeared on our stages whenever he tours this way,b thrilling audiences song after song, story after story.

Whether in print, on record, or on stage, few people communicate with the versatility, charm, wit or pure talent of John McCutcheon. The Smoke Rise, GA based musician – whom Johnny Cash once referred to as “the most impressive instrumentalist I’ve ever heard” – is back on the road, sharing the new music, as well as beloved favorites, live. Here at The 8th Step, we’re thrilled to accommodate.

Long one of America’s most respected and loved folksingers, McCutcheon is master of a dozen different traditional instruments, most uniquely the rare and beautiful hammered dulcimer. Hailed by critics and singers around the globe, his 43 recordings have garnered every imaginable honor. He has also produced over 20 albums of other artists, from traditional fiddlers to contemporary singer-songwriters to educational and documentary works; his books and instructional materials have introduced budding players to the joys of their own musicality. His commitment to union work and other grassroots political organizations has put him, like his friend and mentor Pete Seeger, on the front lines defending issues important to communities and workers.

His most recent 8th Step performances include a 2019 CD Release for To Everyone in All the World, his tribute album to his mentor and friend Pete Seeger; he was a featured performer at The Step’s 2019 Adirondack weekend SeegerSongs at Great Camp Sagamore, followed by two Mandolin.com broadcasts during the Covid lockdown, and one live concert during last Fall’s brief “end” to the Pandemic. 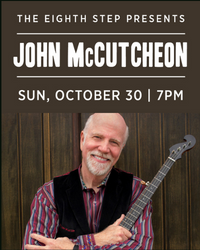