“Before the carnival is over, all Rome will love my Cinderella…”  promised Rossini in 1817, and he was proven right. The Enlightenment having lit its fires throughout Europe, saw his initially controversial adaptation of Charles Perrault’s tale focusing upon the burning issues of the day, confronting social divisions to reveal the crinoline beneath the rags. Here there is no fairy godmother to transform mice into horses, rats into coachmen or lizards into footmen with a mere wave of a wand. And it is a bracelet, not a slipper, that the beauty leaves behind for her prince – quite deliberately – as a challenge for him to find her. Not rated. In Italian w/English titles. 178 minutes incl. intermission. 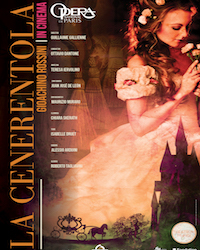