Their last mission wasn’t on the battlefield. Thirty years after serving together in Vietnam, “Doc” Shepherd, Sal Nealon and the Rev. Richard Mueller reunite to bury Doc’s son, a young Marine killed in Iraq.  Forgoing burial at Arlington National Cemetery, Doc and his old buddies take the casket on a tragicomic trip up the coast to New Hampshire. Along the way, the three men find themselves reminiscing and coming to terms with the shared memories of a war that continues to shape their lives.  Richard Linklater (Boyhood) directs.  Steve Carell, Bryan Cranston and Laurence Fishburne star… Fishburne’a work in this film winning him a Best Actor award from the African-American Film Critics Association. Rated R for language throughout including some sexual references. 125 minutes. 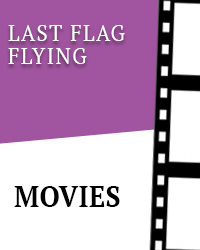