The Last Shot (The story of Eddie Stanley)

The Last Shot, is a vivid and bold American biographical film, passionately executed and directed by Prince Sprauve Visuals (Quiet on Set). This film follows the true story of Eddie Stanley, Jr., a Schenectady High School student and basketball star with so much potential, who was tragically murdered as a result of gun violence. His life, basketball scholarships and any future aspirations were senselessly lost. The short film walks through the last day of the 15-year-old’s life and takes the viewer on a journey experiencing who Eddie Stanley, Jr. was through the eyes of the community that knew and loved him. The film captures how the embodiment of promise can be sadly taken away in an instant.

Quiet on Set films are not merely screen filmings, but they are unique happenings that capture moments and community markers that reveal issues that concern all of us. The purpose of these films is to not only identify these concerns, but to actually make the viewer believe they are experiencing the situation, creating a baseline for meaningful conversations long after the film has ended.

A Quiet on Set film offers more than just a visual storied experience. In previous films featured by Prince Sprauve, the majority of the community was present. From students, parents, schoolteachers, politician, media, and everyone in between. These experiences offered everyone a seat at the table without the “noise” of class, gender or social status. With everyone on level ground, we can successfully work together to create real systemic change to bring our community forward.

This film was created specifically to address the high rate of gun violence within the community and so many others just like ours. The aim is to capture the hearts of the community and convince our citizenry, in particular our young people, to stop turning to weapons to decide conflicts. The film is a stark reminder of how everything can be tragically lost as a result of the choices we make.

Supporting this initiative will help further the necessary conversations that are badly needed with all stakeholders. This project has an important purpose and can have a far-reaching impact.

Eddie Stanley, Jr. was not just a nameless life taken, but a giant in whose shadow we can begin to heal and make real change. 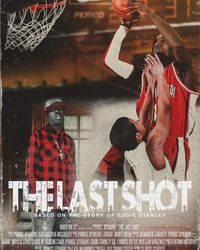