LATE NIGHT
Emma Thompson stars as a brainy, yet distant, late-night talk show host who’s world is turned upside down when she hires her first and only female staff writer (Mindy Kaling). Originally intended to smooth over diversity concerns, her hiring decision proves to have unexpected consequences when the network – feeling the show has grown stale – threatens to replace the learned host with a young male comic whose brow hangs decidedly lower.  Also starring John Lithgow, Amy Ryan and Seth Meyers. Rated R for language throughout and some sexual references.  102 minutes. 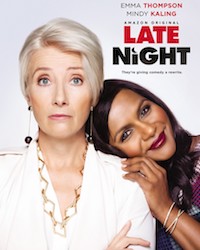