Legendary director Chen Kaige (Farewell My Concubine) teams up with Crouching Tiger; Hidden Dragon screenwriter, Hui-Ling Wang, to create this gorgeous visual feast who’s international box office has actually exceeded that of “Tiger’s.” The plot, as summed up nicely by the L.A. Times, involves an aspiring Chinese poet who – during the Tang Dynasty, over 1000 years ago – joins with an unflappable Japanese monk to investigate the appearance of a savage talking kitty who had been wreaking havoc on the imperial court. In the process, the two untangle a densely woven mystery linking back to the demise of a stunningly beautiful concubine, believed to have been strangled to death decades earlier.”

Based on a real-life murder mystery surrounding the death of Emperor Xuanzong’s imperial consort, Lady Yang Guifei (famously regarded as one of the Four Beauties of China), it is important to note that both the film’s poet, and it’s monk, are also based on historical figures. Rated TV-14. In Mandarin w/English subtitles. 129 minutes. 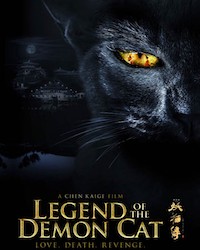