Close message bar
Health & safety protocols: HERE
Fourth of July Closings: The Box Office and Administrative Offices at Proctors will be closed Monday, July 4 and will reopen Tuesday, July 5 at 10:00am
Tickets Group Sales Subscribe Share Save
Saturday, October 15, 2022
MISTY BLUES/QUEENS OF THE BLUES:
2019 International Blues Challenge finalist, Misty Blues, is led by lead singer/band founder Gina Coleman. The band is based out of Berkshire County, Massachusetts playing original and traditional blues with hints of jazz, soul, funk and tent revival gospel since 1999. The band has recorded with Charles Neville, Justin Johnson, Big Llou Johnson and Joe Louis Walker. The band recently earned the 2021 CFAB Music Realm Best Entertainer Award and has amassed several Independent Blues Award nominations. Misty Blues’ original recordings have garnered global radio airplay resulting with a composition on the Roots Music Report Top 20 Contemporary Blues Song Chart for 2021, and a Top 15 song on the 2021 SiriusXm Bluesville End of Year Rack Of Blues List.
In recent years the band has developed a show, Queen of the Blues, which pays tribute to four quintessential female blues artists of all times … Bessie Smith, Big Mama Thornton, Ruth Brown and Koko Taylor. They perform songs and relay stories of these women’s lives in an emotionally packed musical and educational performance. They also show how these women have influenced their original music.
Buy Tickets 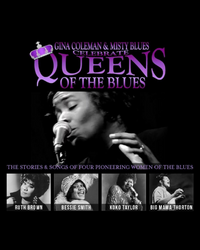