Christmas may be incidental to this film, but Christmas themes are present throughout.  The Rev. Harry Powell (Robert Mitchum) is a religious fanatic who funds his ministry by marrying widows, killing them and then collecting their money.  Sent to prison for mere car theft, he meets condemned murderer Ben Harper (Peter Graves) who – before sent to the gallows for his crime – confesses to having hidden $10,000 in stolen loot and having only shared its location – not with his wife – but only with his children who he has sworn to secrecy.  Released from prison, the not-so-good Reverend Powell becomes obsessed with finding the money, charming Harper’s widow (Shelley Winters), and getting his hands on those kids.  A Christian of a very different ilk (the wonderful, Lillian Gish) helps the children escape the conman’s grasp.  Not rated.  112 minutes 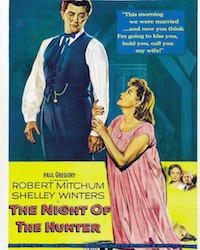