The NY Dog Film Festival® is an annual philanthropic celebration of the love between dogs and their people. The Festival is a two-hour program of short films with a canine theme – a medley of animated, documentary and narrative films from around the world. The Festival premieres every year at a theater in New York City and then travels to theaters in cities across the United States and Canada, with a portion of every ticket benefiting a local rescue devoted to canine welfare.

This was the most competitive year ever, with 64 submissions of films from all over the world – Australia, China, France, Germany, India, Iran Islamic Republic, Israel, Italy, Mexico, Russian Federation, Singapore, Sweden, Switzerland, and Turkey.

Run time – 99 minutes.
Rated: There is no nudity, sexual reference, vulgar language or physical or verbal abuse between people – and no animals were harmed – in these films. Any tears you might shed would be tears of joy for happy endings. The films can be watched by all members of the family, but are intended for adults and more mature children.

And don’t miss out on your chance to celebrate the NY Cat Film Festival on November 5!

A music video celebrating the love, loyalty and trust between dogs and their humans.

A tribute to canines who supported humans during the pandemic.

A documentary about Jazz, a shy shelter dog who helps Kimo in his struggle to come out as gay in a conservative Mormon family, and supports him through taking care of his father in his final illness.

The animated story of a puppy raised to be a service dog who had to overcome a series of personal challenges to find his purpose in life.

A documentary about a refuge for abandoned dogs in La Paz, Mexico, the dedicated volunteers who care for them, and the happy endings for two of the hard-to-adopt resident dogs.

An animated story about a dog who brings social justice to his master, who is a janitor the dog follows to work every day on the bus.

A quirky documentary following the relationships between a few women and their dogs, seen only from the canine perspective.

A documentary about an Irish puppy who was left at a dog pound in Cork, Ireland. A year later, his new owner in Sweden ponders how he found his way to her family.

An animated version of Boy Meets Girl story with the help of his best friend, his Dachshund.

A haunting documentary about a brave soul who makes rounds in his truck to deliver food to the packs of glorious stray dogs who scrabble to survive outside the town of Van, Turkey.

An animated story about how Whiskey, a pug, feels when his mistress leaves home for college.

Introducing a glorious young actress, this narrative film follows a lonely teenage girl, whose single mother is always away on business and whose only friend is her aging dog Adam.

A young girl challenges misconceptions about Pit Bulls as she shares her positive experience living with Cocoa, an adopted Staffordshire Bull Terrier.

Documentary about the dog training program at the California Men’s Colony in Central California, where a special connection forms between dogs and their inmate handlers, as the prisoners lovingly train them to be service dogs.

An animated saga about a cat detective in Mew York – where all the steaks have been eaten by someone they are calling the “Sirloin Snatcher” and a guilty-looking canine tries to avoid suspicion by masquerading as a cat- but will his façade hold up?

A sweet documentary about a rural town of Southern California where the “elected” mayor is a Golden Retriever named Max, a beacon of positivity to the citizens of Idyllwild.

An animated tale of two cowboy dogs who get into an altercation in a saloon after one accuses the other of taking his bone. 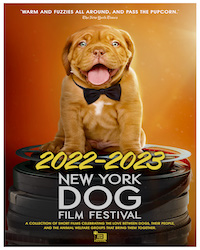