One Night Only! The Cabaret Series at Proctors
Saturday, January 27, 2018, 7:30 pm
From Broadway to Proctors, join us for an evening of style and song with the stars of Broadway…one night only.

One Night Only! Package
Subscribe to the whole series for as little as $128!
20% off the complete series when you buy all four nights.

Tony Award® winner, Donna McKechnie’s new show, Same Place: Another Time, is a musical déjà vu celebrating the scintillating ‘70s in New York City — the heyday of Studio 54. The journey she takes puts a personal spin on the “ingénue” coming to New York, finding love and success, losing her innocence along the way, perhaps, but never her spirit. It is beautifully illuminated by the music of Irving Berlin, Stephen Sondheim, Marvin Hamlisch, Peter Allen, Jim Croce and Leroy Anderson.

Donna McKechnie received a Tony Award for her performance in the original production of A Chorus Line, and is regarded internationally as one of Broadway’s foremost dancing and singing leading ladies. Her Broadway shows include How To Succeed In Business Without Really Trying, A Funny Thing Happened On The Way To The Forum, (national tour), The Education Of H*Y*M*A*N-K*A*P*L*A*N, Sondheim – A Musical Tribute, On The Town, Promises-Promises, Company, State Fair and The Visit. She has starred in numerous productions in London’s West End, including Promises-Promises, Company, Follies and The Wild Party. 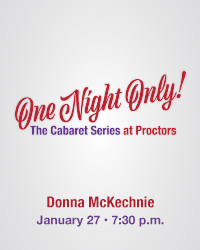