New music, old magic. If genre-defying music was a genre, Ljova and the Kontraband would probably defy that too. For if bringing together influences from classical, klezmer, tango, jazz and Gypsy music has been done before, nobody does it quite like this. Moscow-born, New York-based composer, arranger and violist Lev ‘Ljova’ Zhurbin writes and plays music that evokes forgotten memories of things you think you’ve heard before but haven’t, while dreaming of Bartok and Piazzolla trundling through an early-morning Hungarian mist in a three-legged race to the village dance at the end of time. The ensemble features his close collaborators on accordion, bass and percussion, as well as the vocal of Inna Barmash.

In 2017, Ljova and the Kontraband recorded a Tiny Desk Concert for National Public Radio. The ensemble has made appearances throughout the USA, and has also debuted in Canada, the United Kingdom and Taiwan. Ljova and the Kontraband have performed at venues such as New York’s Lincoln Center and the Museum of Modern Art, The Kennedy Center in Washington DC, Ottawa Chamberfest, the Colorado Music Festival in Boulder, and the Brooklyn Academy of Music, where it was the opening musical guest of the Sundance@BAM Film Festival.  Among others, the Kontraband has collaborated with filmmaker Sean McPhillips on his film “Cupcake” (premiered at Tribeca Film Festival, and performed live at Lincoln Center), and with Aszure Barton & Artists on the dance piece “Busk”, performed live at Baryshnikov Arts Center.

LJOVA AND THE KONTRABAND is: 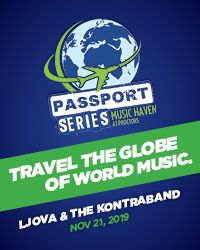