Sona Jobarteh is the first female Kora virtuoso to come from a west African Griot family. Breaking away from tradition, she is a pioneer in an ancient male-dominated hereditary tradition that has been exclusively handed down from father to son for the past seven centuries. Reputed for her skill as an instrumentalist, distinctive voice, infectious melodies and her grace onstage, Sona has rapidly risen to international success following the release of her critically acclaimed album “Fasiya” (Heritage) in 2011.

The Kora (a 21-stringed African harp) is one of the most important instruments belonging to the Manding peoples of West Africa (Gambia, Senegal, Mali, Guinea and Guinea-Bissau). It belongs exclusively to griot families (hereditary musical families), and only those who are born into one of these families have the right to take up the instrument professionally. Sona, who was born into one of the five principal Griot families, has become the first female to take up this instrument professionally in a male tradition that dates back over seven centuries.

Sona’s family carries a heavy reputation for renowned Kora masters, notably her grandfather Amadu Bansang Jobarteh who was an icon in Gambia’s cultural and musical history, and her cousin Toumani Diabaté who is renowned for his mastery of the Kora.

In recent years Sona has quickly been rising to international success, headlining major festivals around the world in Brazil, India, South Korea, Ghana, Mexico, Tanzania, Cote D’Ivoire, Lithuania, Poland and Malaysia just to name a few. Sona and her music has the unique ability to touch audiences from all backgrounds and cultures. 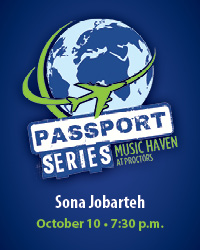