“The Judds owe Hazel and Alice a sincere thank you, not only for showing us how to take our first musical step, but for continuing to help preserve old-time music”    NAOMI JUDD

The Piedmont Melody Makers, unashamed purveyors of Contemporary old-time blues, honky-tonk, country and bluegrass music, take their name from the Piedmont region of eastern North Carolina where three of the band now reside, a region known for the music they love and perform. Featuring the incomparable, Grammy-nominated Alice Gerrard alongside folk stalwarts Jim Watson, Cliff Hale, and Chris Bashear, they celebrate the release of Brashear’s Colton House Recordings and Gerrard’s release of the practice tapes Hazel & Alice Sing Me Back Home: The DC Tapes 1965-1969 (‘Hazel” is the legendary Hazel Dickens, Alice’s singing partner).

Here are artist bios taken from a Davis Enterprise article on the band:

ALICE GERRARD (guitar, banjo, vocals):  “The 2015 Grammy nominee for her album Follow the Music is the agile force, the gravitas, that keeps the Piedmont Melody Makers from being just good hitting baseball with the occasional base stealing. She’s the grand-slam, thank you Ma’am. Gerrard is bluegrass and old-time music royalty, establishing herself in the music world in the ‘60s and’70s as one half of the famous duo Hazel & Alice with Hazel Dickens, opening bluegrass doors to women. Other notable collaborations include with her then-husband Mike Seeger (yes, Pete’s half brother). Gerrard plays guitar and banjo, writes songs and sings them with all the swoops and bluesy twirls that is all soul and no flash. She knows what she is doing.”  [more bio below]

JIM WATSON (mandolin, bass, vocals): “This irrepressible reprobate is still out there playing music after catapulting into international stardom with the original Red Clay Ramblers and then orbiting planet Earth with Robin and Linda Williams. He is the heir-apparent to Charlie Poole as THE exponent of North Carolina hillbilly music, and Poole could not have chosen a more worthy successor. He is the senior male member of this great conflagration, but don’t be fooled: he can put both of them other boys under the table in the weight room. So there.”

CHRIS BRASHEAR (fiddle, bass guitar, mandolin, vocals) “Comes from the state that begat Mark Twain and John Hartford, but he isn’t nearly as funny as the first and he never learned to fiddle and dance at the same time (like the second). He does, however….sing a pure, clear tenor that would make Alfalfa weep. He’ll also pen a good song or two for every Melody Makers’ set, with no apparent navel-gazing anywhere to be found….He has performed with Robin & Linda Williams.”

CLIFF HALE (fiddle, vocals) “is from West Virginia and that says something right there. He likes beer and ramps and collects all sorts of wild mushrooms. He’s fit and lean, keeps his hair pretty short and sings all them other singers into the next county. He puts fear into a man’s heart and lust into a woman’s when he sings, because that’s what happens when you are a profound blend of Hank Williams, Lefty Frizzell and Carter Stanley all in one voice. And he’s a monster on the mandolin.” 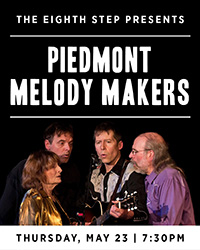