Comedy fans might recognize Bronx native Adrienne Iapalucci from her performances as a semifinalist on season seven of NBC’s Last Comic Standing. She has also been featured in the Daily News, The New York Times, Reader’s Digest and TimeOut NYand seen on AXS TV’s Gotham Comedy Liveand The Late Show with David Letterman.

In 2009, Iapalucci—a Pretty Much the Best Comedy Show veteran—won the first ever People’s Choice award at the New York Comedy Festival. She was also a semifinalist in the festival’s New York’s Funniest Stand-Up competition and a runner-up in the New York Underground Comedy Festival’s Best of the Boroughscontest. In 2010, she made her international debut as part of Montreal’s Just for Laughs Festival, where she took part in “New Faces.”

Iapalucci’s skewed look on life is reflected in her unique brand of intelligent comedy. Her dark sense of humor is enhanced by her political incorrectness, and counteracted by her love of puppies. 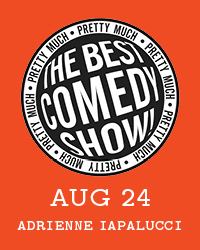