Andy Sandford is a comedian who got funny in Atlanta, Georgia and is now based in New York City. He headlines the Thanksgiving Weekend edition of Pretty Much the Best Comedy Show at Proctors Theatre on Saturday, November 24th.

In 2015, Andy made his late night debut on Conan, which was included in The Laugh Button’s “Top 5 Late Night Stand-up Debuts of 2015.” In 2014, Sandford released his album, Me the Whole Time, which made several “best of” lists, including Splitsider’s “9 Best Standup Specials & Albums of 2014.” Andy also played an animated version of himself on Adult Swim’s Aqua Teen Hunger Force. Brooklyn Magazine named Andy one of “Brooklyn’s Funniest People;” the Village Voicecalled him “one of New York’s comedic gems;” and despite all of this, he has managed to remain humble.

His first TV special, Shameful Information, was released in July of this year, to critical acclaim.

“It’s a testament to Sandford’s deep well of material that midway through his album, he’s telling stories that most comics would save for their closers”–The Spit Take

“It’s been said that the best comedy comes from pain. If that’s really the case, then somebody must have kicked the #@&% out of Andy Sandford? Sandford is a skillful linguist who carefully plays with pitch, tone and timing to spice up his jokes”–Creative Loafing Magazine.

The November 24 edition of Pretty Much The Best Comedy Show will include a hosts Ethan Ullman and Thomas Attila Lewis and feature acts Maria Heinegg and Jordan Jensen. The lineup of the show is subject to change without notice. 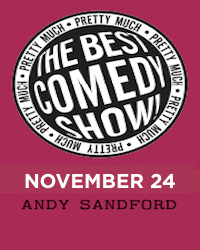