Award-winning comedian and writer David Feldman headlines Pretty Much The Best Comedy Show on January 27th! Feldman began as a standup comic in San Francisco and currently resides in New York City. He has about 6 kids and several ex-wives. Feldman spoke at Pitzer College’s 2009 Commencement Ceremony[2] and released an album in the same year called ‘Left Without Paying’.

He has also written on ABC’s Roseanne, HBO’s Dennis Miller Live, HBO’s Real Time with Bill Maher, Comedy Central’s The Daily Show with Jon Stewart, and Fox’s Talk Show With Spike Feresten. He co-hosts the Ralph Nader Radio Hour with Ralph Nader and Steve Skrovan distributed via the Pacifica Radio Network.[1]
Feldman has also written for The Academy Awards, The Emmys, Triumph The Insult Dog Comic and countless roasts on Comedy Central. Over the past few years he has written with and for Steve Martin, Martin Short, Robin Williams, Nathan Lane, Robert Smigel and Bette Midler.

As a comedian, Feldman has appeared frequently on Late Night with Conan O’Brien, The Tonight Show and The Late Late Show, as well as his own special for Comedy Central. Feldman has also done commentary for Salon magazine.

Our feature act for this show is comedian, writer, and producer Jon Ross. Ross has appeared on Late Night With Conan O’Brien and is known for This Just In (1993), Not Necessarily the News(1982) and Marvin Marvin (2012). 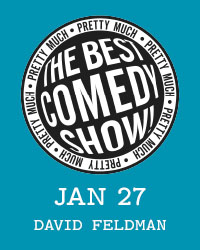