Chris Lamberth is an actor and comedian based in the New York City area. He has shared the stage with a variety of national headliners including Bill Burr, D.L. Hughley, Craig Robinson, Marc Maron, Maria Bamford, Maronzio Vance, and Wyatt Cenac. He has performed on AXS TV’s Gotham Comedy Live and the critically acclaimed podcast 2 Dope Queens. He earned an MFA from The Theatre Conservatory at Roosevelt University in Chicago, IL. His television and film credits include High Maintenance (HBO), Jessica Jones (Netflix), The Last O.G. (TBS), Unbreakable Kimmy Schmidt (Netflix) and the upcoming film Can You Ever Forgive Me? (Fox Searchlight) starring Melissa McCarthy. He also serves as host of The Mundane Festival–a weekly podcast available on Apple Podcasts, Stitcher, and Podbean. 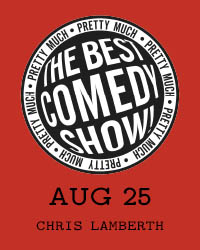