Cook has released two successful musical comedy albums: Betty Pitch, which she recorded after writing 250 songs a day during the pandemic (amassing her over 100K TikTok followers), and Zinger-Songwriter, which she recorded at 12 different venues while on tour across the US and UK. Both are regularly featured on Sirius XM. She is currently touring the The Writing on the Stall, a one-woman bathroom stall graffiti musical, which has made its official debut at the Edinburgh Festival Fringe in Scotland in August 2022.
The show will also have a host and guest comedian. Patrons are encouraged to buy tickets in advance to guarantee seating at the show. Lineup subject to change without notice. This is an ADULT comedy show – attendees should be at least 18 years old.
Buy Tickets 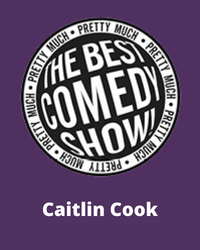