Chris Laker is a New York City based stand-up who made his television debut on Jimmy Kimmel Live. Named a New Face at the Montreal Just for Laughs Comedy Festival, Chris’s sharp and edgy comedy has earned him a loyal following in New York’s alternative scene, where he’s hosted a variety of shows (The Show at The Creek and the Cave, The Laker Awards) and podcasts: This Week in Jackin’, Heteronormative, and Overslept. This past year Chris has been opening for Mike Birbiglia on his Working It Out and The New One tours all over the country. Chris’s debut stand-up album, “Moments of Greatness”(Comedy Dynamics) is available everywhere that sells music. 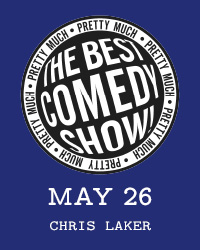