The intricate history of a beautiful antique violin is traced over three centuries.  Beginning with its creation in Italy, where, after the death of his beloved wife, a legendary violin maker – eager to keep her memory alive – decides to use his wife’s blood as paint for the instrument.  Over the years, the violin travels through four different countries and several owners, inspiring passion in them all.  Ultimately, it finds its way to a modern Montreal auction house where it catches the eye of an expert appraiser.  Samuel L. Jackson, Gretta Scacchi, Sylvia Chang are among the stars. Rated R for some sexuality. In French, English, Mandarin, Italian and German (with English subtitles where applicable). 130 minutes.

NOTE:  Sadly, Ms. Elizabeth Pitcairn is no longer scheduled to attend either of our screenings.  Her appearance was originally scheduled alongside a concert performance at  First United Methodist Church, but that concert has been cancelled. 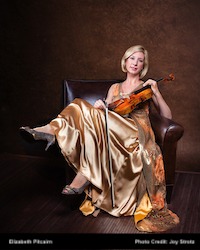