A Rochmon Record Club Listening Party is a multi-media event to inform and deepen our understanding and history of the individual performers, songs and stories during the creation of iconic albums. Each Rochmon Record Club Listening Party includes over 350 images and the playing of the entire original album. In addition to the music,  we examine the lyrics, explore sales and awards and look closely at the album’s cover.

“Rumours” is Fleetwood Mac’s best-selling album and considered to be one of the greatest albums ever recorded. Made during a time of tremendous emotional turmoil within the band, “Rumours” features “Don’t Stop,”  “Go Your Own Way,”  “The Chain,” “Second Hand News” and seven other iconic songs. We will listen to the album on the GE Theatre’s state-of-the-art sound system.

Chuck Vosganian AKA Rochmon is a lifelong musician and fan of all things creative. Chuck has been listening to music since before he was born and is a major fan of the pre-digital age of Rock & Roll. Chuck is a professional audio engineer and lives in Saratoga Springs with his wife Karen.
Facebook – @RochmonRecordClub
Instagram – rochmon_ 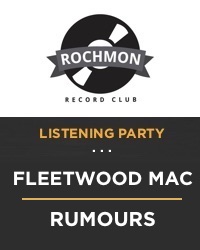