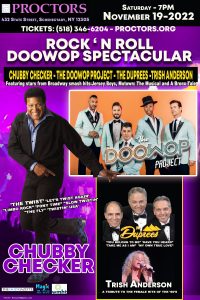 An incredible four act ROCK N ROLL/DOO WOP SPECTACULAR roars into Proctors on Saturday, November 19 at 7:00 pm.   Headlining the show is the legendary CHUBBY CHECKER.  Chubby grew up in South Philadelphia and amused his classmates at Settlement Music School with his vocal impersonations of Jerry Lee Lewis, Elvis and Fats Domino.  He recorded a version of “Jingle Bells” in which he imitated popular recording stars, and Dick Clark sent the song as a Christmas greeting to his business associates.  Cameo Parkway Records signed Chubby and, by the summer of 1960, The Twist was a #1 hit, introducing the concept of “couples dancing apart to the beat.”  This led to a dance craz revolution, including the Jerk, The Hully Gully, the Boogaloo, etc., and Chubby was at the forefront with “The Fly,” “The Pony” and “The Hucklebuck.”  “Pony Time was a #1 hit and The Twist re-entered the charts and hit #1 again.  Chubby Checker merchandise was everywhere: t-shirts, shoes, ties, dolls, even chewing gum.  More huge hits followed: “The Fly,” ”Let’s Twist Again,” “The Limbo Rock,” and he won the Grammy for Best Rock Performance.  He was the only act to have 5 albums in the top 12 at the same time, and, in 1964, he married Catharina Lodders, Miss World of 1962.

Chubby looks, acts and dances like he’s 50 years old.  You’ll see why he was voted “Casino Performer of the Year” and why “The Twist” was the most frequently played song on the radio in the history of rock .

Members of the Doo Wop Project:

Another Proctors’ favorite, “The Duprees,” will also perform.  Known worldwide for their romantic interpretations of beautiful love songs, their vocal prowess and heavenly harmonies are amazing.

Their hits include “You Belong to Me,” “My Own True Love,” “Why Don’t you Believe Me” and “Have you Heard”.  While their romantic harmonies are second to none, The Duprees also present a dynamic stage show that will bring down the house.

Opening the show is long-time regional favorite Trish Anderson, singing female hits from the era.  In her first decade of performing, Trish is widely recognized as the lead singer of the Bluz House Rockers.  Inducted into the NYS Blues

Hall of Fame, Trish has shared the stage with Peter Noone, Pat Benatar, Joan Jett and Eddie Money.  A singer songwriter, her “Three Dollar Bill went to #2 on the pop 100 charts in Denmark.

Four great acts, one great night of timeless music transporting the audience back to a wonderful time of

Their lives.  It is an honor to bring both  Chubby Checker and the Doo Wop Project to Proctors for the first time. 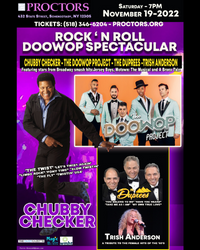