During the first half of the 1970s, West German bands like KRAFTWERK, CAN and FAUST escaped from pops three-minute straitjacket and the results were as astonishing as they were influential: DAVID BOWIE, RADIOHEAD and SONIC YOUTH being among the many musicians giving credit to Krautrock as inspiration. Though initially coined as dismissive, many of the bands who found themselves caught up under the unusually wide “Krautrock” umbrella, came to embrace and even celebrate it. Krautrock, however, consisted not of a singular sound, but of an entire family of psychedelic, electronic, rock and ethnological styles, having in common only a revolutionary free spirit fashioned without American radio in mind.

Too expansive a topic to be contained within a single program, Romantic Warriors: Krautrock is merely one part of an intended series, and DVD copies – limited to 10 – of this first film, will be made available for discounted purchase at the event!

As with our other ICFS events, expect prizes, surprises, comfy couches and mind-expanding drink specials!  Romantic Warriors: Krautrock 1  is not rated, and runs 129 minutes. 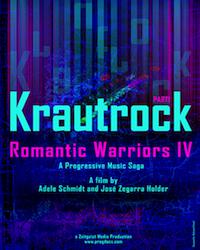