The weather outside is frightful, but Sing Solstice is so delightful! On Winter Solstice – the shortest day and longest, darkest night of the year, come spend an evening with Terry Leonino & Greg Artzner (Magpie) and Kim & Reggie Harris, for a bright, warm and wonderful musical celebration of the Season of Light that inspired such Midwinter celebrations as Christmas, Kwanzaa, Hannukkah, Yule and more in cultures around the world. We’ll welcome the gradual lengthening of days that will begin at dawn, December 22nd – its Midwinter! It’s Mother Nature’s New Year!!

Joining them onstage: noted percussionist Ade Knowles on African drum, who has to his credit 50 years of performance, residency, workshop and recording credits on African, Afro-Cuban, and New World music and dance.

Significant in early times, the Solstice was viewed as an omen of hope. It was a reminder that the darkest days inevitably give way to light, especially meaningful in view of Washington, global warming and people in distress at home, at our border, and around the world.

Now the days grow a little longer, a little shorter each night Touch this flame to another candle in this season of light With lights in every window on our houses and trees We’ll push away the darkness for a new year of peace

On this night of December 21st the longest, darkest night of the year will shortly break into a new dawn, lighting our way to Spring and Summer: fertility, new growth and rejuvenation, second chances. Come for laughs, harmonies…light!
[Note: Pokingbrook Morris Dancers will not be performing tonight.] 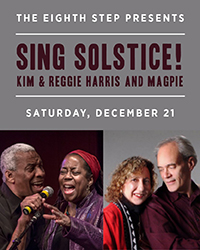