An incredible six act Sixties Spectacular roars into Proctors Theatre on Saturday, April 7, 2018 at 7:00 pm. Relive those great days with an incomparable lineup of hit-makers who continue to “deliver the goods” on stage.

Headlining the show are Jay and the Americans. The band started with four teenagers singing in Sandy Yaguda’s Brooklyn basement, and they have come a long way baby! They enjoyed 12 top 10 records, including “She Cried,” “Cara Mia,” “This Magic Moment,” “Come a Little Bit Closer,” “Only in America,” “Let’s Lock the Door (and Throw Away the Key), “Some Enchanted Evening” and “Walkin in the Rain.” Three original members plus Jay #3 will bring the house down.

The Vogues are renowned for their stylish delivery and incredible vocal harmonies. From 1965-1970, they recorded nine top 20 songs, including “You’re the One,” “Five O’ Clock World,” “Turn Around, Look at Me,” “My Special Angel,” “Till,”
“Moments to Remember” and “Green Fields.” Voices from Heaven!

The Brooklyn Bridge were formed by combining the Crests’ lead singer, Johnny Maestro, the Del-Satins (Dion’s backup singers) and a horn section. Maestro had several hits with the Crests (“16 Candles,” “The Angels Listened In” and “Step by Step”) which are still part of the Bridge’s performance. Brooklyn Bridge hits include “The Worst Than Could Happen” (written by Jimmy Webb), “Blessed is the Rain,” “You’ll Never Walk Alone” and “Your Husband, My Wife.” Six original members are joined by lead singer Joe Esposito, who is incredible. Joe sang “Lady, Lady, Lady” in the film Flashdance and “You’re the Best” in Karate Kid. He collaborated with Donna Summer on “Heaven Knows” and Bad Girls.” These guys will steal the show!

Chicago native Dennis Tufano was the original lead singer of The Buckinghams.
Their top hits include number one smash “Kind of a Drag,” “Mercy, Mercy, Mercy,” “Don’t You Care,” “Susan” and “Hey Baby (They’re Playing our Song).” Dennis has done it all, including touring with Olivia Newton-John (including amazing duets of “Suddenly” and “You’re the One That I Want”). He has been an actor, stuntman and producer in Hollywood and done famous voice over work on tv and radio. His tribute to Bobby Darin is part of the show and not to be missed.

Local heroes, The Oldies Show consist of three dramatic vocalists and a killer rhythm and horn sections. They will present a high energy trip back to hits of the 60s.

Six great acts, one great night of music from the best era of our history-the 60s! You don’t want to miss this show. 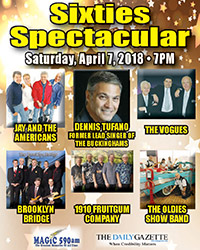