It’s the centennial of Pete Seeger’s birth on this night, musically celebrated by his friends here at The Step to honor his environmental work and “his almost mystical connection to the Hudson River”  NEW YORK TIMES

Who better to lead such a festive event than two of his long-time friends, fellow sailors and singing partners Capt. Rick Nestler and Rik Palieri – known onstage as The RIX? This night’s concert previews the duo’s soon-to-be released CD of Seeger’s nautical songs, and we’re keeping ticket prices low as a salute to Pete.

Both professional musicians, Nestler and Palieri sang for decades with Seeger, often appearing with him at benefits for Sloop Clearwater or a vast variety of other events as part of the Clearwater Sloop Singers and/or the Clearwater crew. It’s particularly fitting that they honor Seeger’s centennial with a special collection of maritime songs: some old traditional shanties and fore bitters, some familiar, some obscure, some other people wrote that Pete adopted, and some of his original songs – all with nautical themes. Familiar tunes include “High Barbary,” “Hudson Whalers,” “Blow the Man Down,” “The E-RI-E,” “Pay Me My Money Down,” “Reuben James” and “River That Flows Both Ways,” the last a Hudson River anthem by Rick Nestler that was recorded at least twice by Seeger. These songs are all part of the sloop Clearwater crew repertoire, often heard wafting out over the Hudson as the sail rises.

Interestingly, the Rix also include some of Pete’s own, less well-known songs like “The Ballad Of The Sloop Clearwater,” “Don’t Ask What a River is For,” “The Song of The Last Whale,” “The Sloop Woody Guthrie” and many more.

Seeger’s brainchild Sloop Clearwater is a life-sized replica (108’ mast) of cargo/passenger ships that dotted the 18th & 19th Century Hudson River, connecting upriver ports to bustling New York City. Launched in S. Bristol, Maine with great media fanfare, the Sloop sailed her maiden voyage with musical crew Len Chandler, Don McLean, Gordon Bok & Seeger, among others, stopping for dockside festivals during the day, and holding concerts at night to pay expenses. Seeger & his legion of friends, in a spirit of education, advocacy and celebration, proceeded to lead a cleanup of New York’s heritage waterway, then little more than a floating sewer. The  Clearwater with her 108’ mast quickly became a symbol of the environmental movement worldwide, inspiring similar projects in the U.S. and abroad. She still sails today.

To conjure the hearty authenticity and spirit of singing on board the Clearwater sailing the Hudson, or on the ocean, The Rix will be joined onstage by fellow Sloop Singers Sarah Underhill and Melissa Ortquist; like the Rix, both sailed, sang and recorded alongside Seeger. 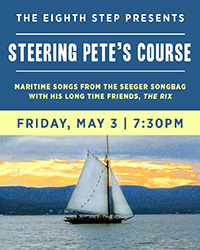